With crowd sourced data from all 50 U.S. states and over 52 countries around the globe, we are learning from the most important source: You. After two years, over 3,500 people have registered. The results below are based on a sample of the first 2,874. For data on the first 1100 to register, see the old results page from 2012. 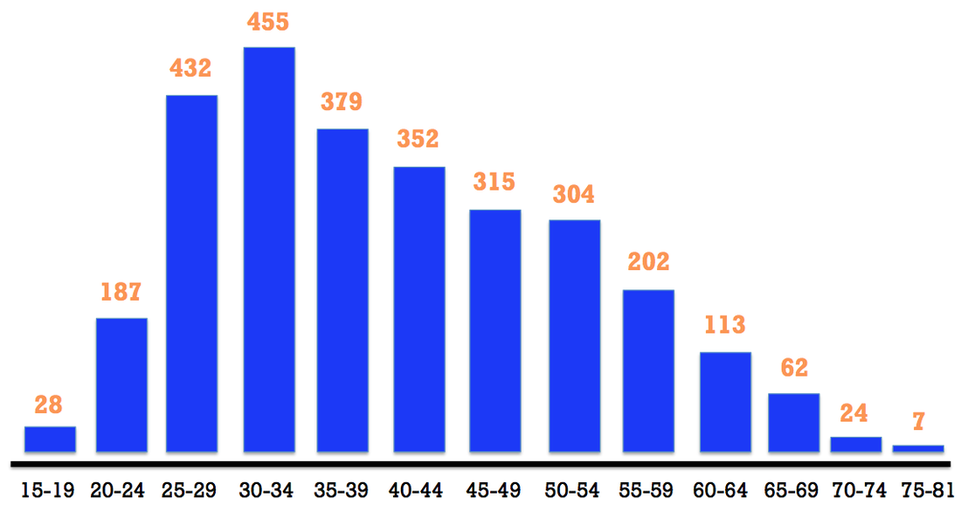 Out of the first 2,874 people to register, the average age is 40.3, median age is 39, with a standard deviation of 12.2. The youngest person to register was 15 years old, and the oldest was 81. The average age in the National Weight Control Registry is 47.

The Majority of Registry members graduated college. Those who have a graduate degree of some kind (29%) were the second most represented group. 4% of members finished high school and not college, while the remaining members have completed 'some college' or obtained an associates degree (not shown). 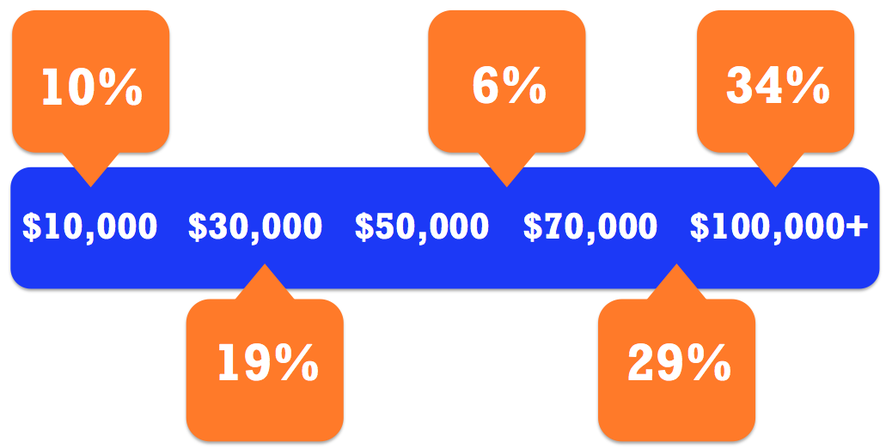 The socioeconomic status of the registry members tilts towards the upper class. Of course, all studies are biased by the study subjects, and this one is no different. This sample is heavily biased towards people with computers who use the internet to find nutrition information. 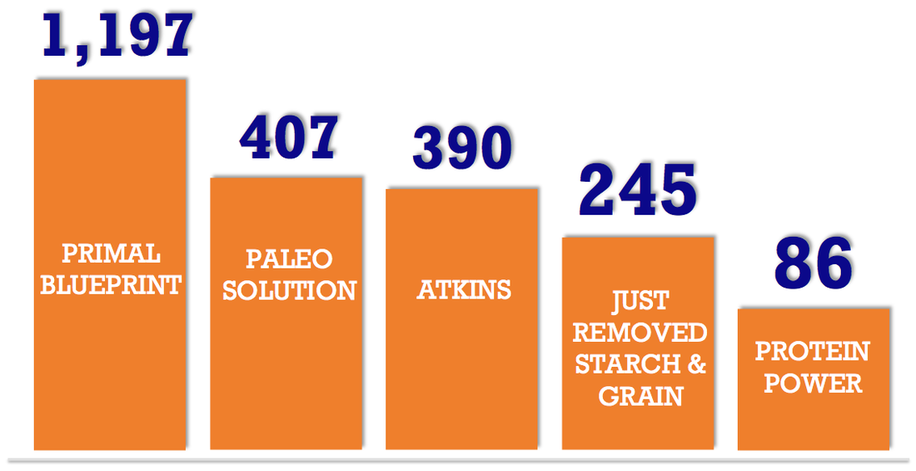 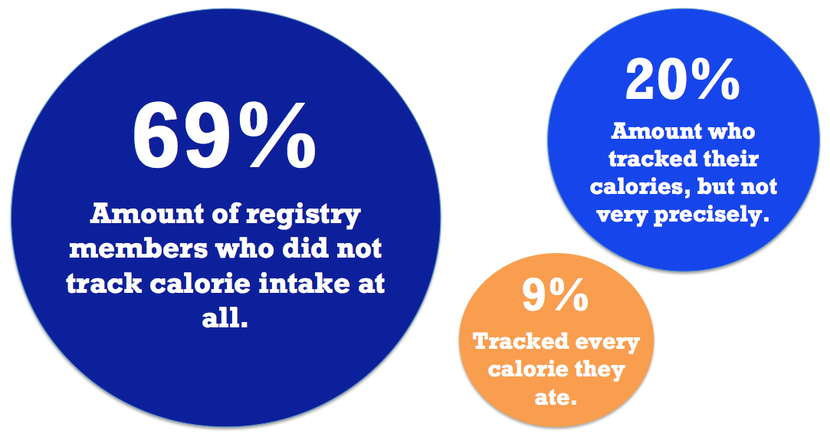 CALORIE COUNTING IS NOT VERY COMMON

While surprising at first glance, people eating a high protein, high fat diet while low in carbohydrates lose weight despite not counting calories. In clinical trials, the subjects assigned to the low carb diet are told to eat ‘ad libitum,’ Latin for “at one’s pleasure.” Despite this lenient recommendation, these subjects seem to lose the most weight. Whether they spontaneously eat less total calories, or there is less net-insulin release in response to their low carbohydrate intake, the results are clear: People who eat high protein, high fat diets, seem to lose more weight without counting calories.
See the studies here. 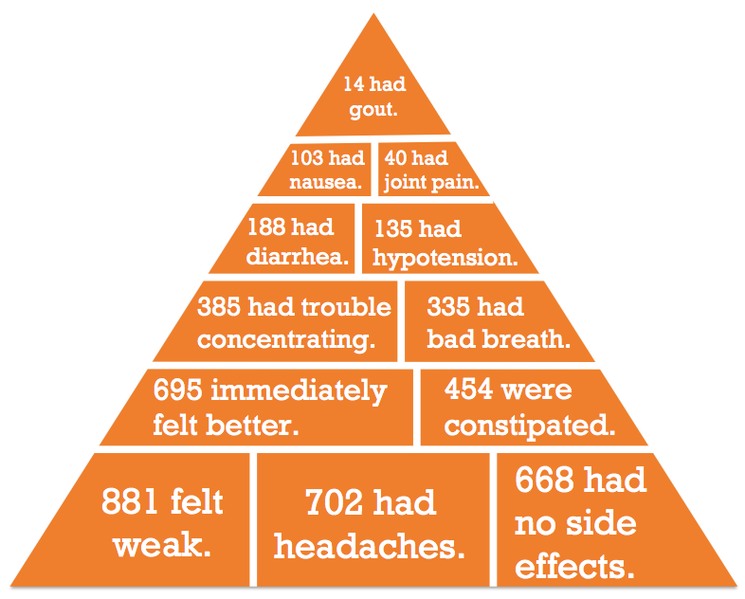 Subjects that slowly transitioned into their new way of eating were more likely to experience no side effects, and less likely to report feeling weak or experiencing headaches. 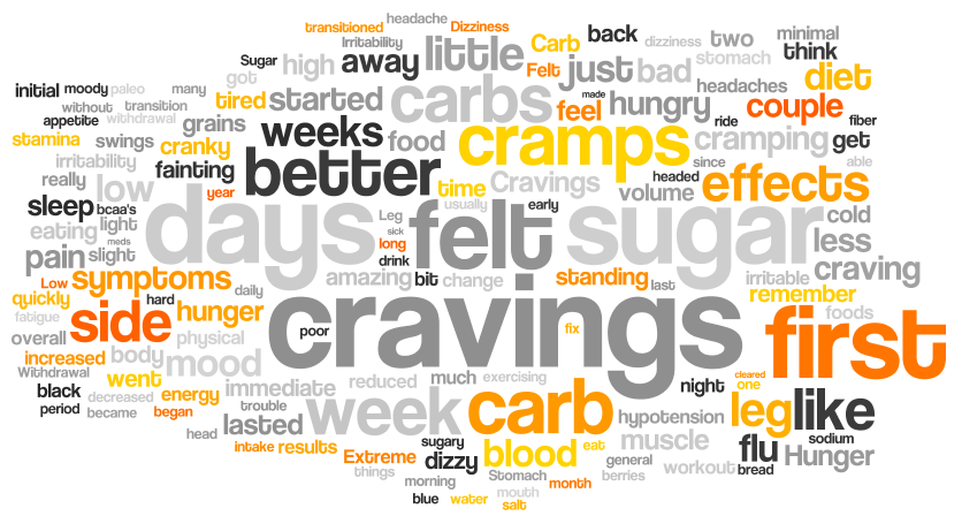 The size of words in word cloud above are a function of how frequently each word appeared in the reported benefits free responses. Out of the 'Other' option of side effects, members commonly reported withdrawal-like symptoms, very similar to those smokers experience when trying to quit. Headaches, irritability, intense cravings for carbohydrates and sugar, and flu like symptoms were common as people transitioned to their new way of eating. 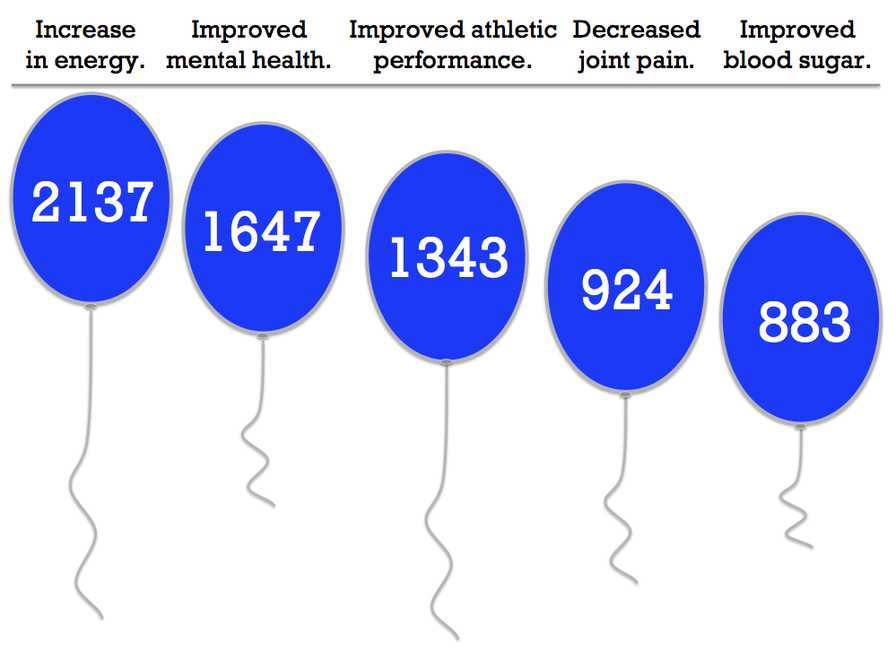 Among the 2,874 members, 74% reported increased energy, 57% reported improved mental health (commonly described as a sense of clearness, or a sudden disappearance of a 'brain fog' they felt), 47% said their athletic performance improved, 32% said their joint pain or arthritis improved or disappeared completely, and 30.7% reported improvements in their blood sugars.

While the above responses can be quite vague, many of these reported benefits are corroborated by the subject's free responses, which offer a more accurate, unbiased representation of the actual outcome related to their paleo or low carb nutrion.

The free response perhaps offer the most accurate, pure window into the benefits that more likely can be attributed to the change in diet. Without leading questions or check-all-that-apply boxes, the free response allows each registry member to spontaneously volunteer symptoms and improvements they experienced. While one or multiple such reports are likely unreliable, hundreds of similar reports from dozens of countries and varying demographics suggest a very real effect that a paleo or low carbohydrate diet may have had on each individual's health. And herein lies the beauty of crowd-sourced data.


Methods for Obtaining Related Quotes
Due to the sheer volume of text submitted from the nearly 3,000 members, it would be nearly impossible, highly inefficient, and more subject to any inherent biases we may have to manually comb through all responses and pick out quotes related to a particular topic. Instead, we use a computer script that searches our database for reports related to a particular keyword and aggregates them all into a condensed file for further analysis. Below are small selections from three topics: Skin, Arthritis, and IBS. For a more comprehensive list, see the testimonials. 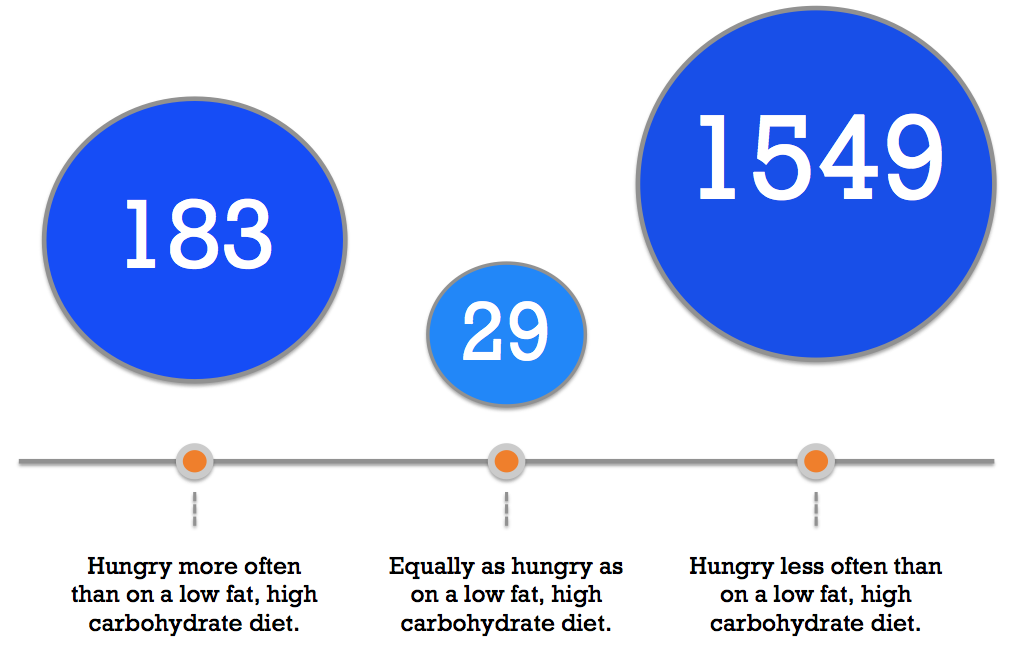 AS COMPARED TO A LOW CALORIE DIET

Among those registry members who have tried a low calorie diet in the past, the vast majority of them reported being less hungry while eating a carbohydrate restricted or paleo diet. These results cannot be overstated. How can we expect someone to ignore their most basic physiological drive - to eat when they are hungry - simply because they have reached their daily limit of fat calories as mandated by the United States Department of Agriculture?

THEY STARVED, WE FORGOT

In 1944 Ancel Keys, recruited 36 men into what would be known as the Minnesota Starvation experiment, to determine the physiological and psychological effects of severe and prolonged dietary restriction. The men were fed on average 1547 calories per day, which is generous compared to many available weight loss programs today.

After three months, the subjects lost a significant amount of weight, along with their sanity. A mountain of dangerous side effects appeared: depression, hysteria, hypochondriasis, self-mutilation, and declines in sexual drive. Not to mention, they were starving. Here is how one subject described eating 1547 calories each day:

How did the caloric intake of a "starvation diet" become the standard of care today? In contrast, when registry members from Africa to Alabama describe their appetite on a paleo or carbohydrate restricted diet, the results are overwhelming & universal: they just aren't that hungry anymore.