Since the Dietary Goals for the United States were published in 1977 suggesting everyone increase their carbohydrate intake and decrease their fat intake, has there been any evidence to support this recommendation? Find some and win money.

The challenge is simple:

2. Submit them by email to info@awlr.org.

3. Donate to the pot and increase the stakes.

After the challenge has concluded, the person(s) who find such trials will win a 40% of the donation pot. The remaining 60% (or entire pot if no winners) will be donated to the Nutrition Science Initiative*.

In February of 1977, the first ever Dietary Goals for The United States were released, in response to the fact that "six of out ten of the leading causes of death have been linked to our diet." The Government, the report explains, "has an obligation to acknowledge this. The public wants some guidance, wants to know the truth, and hopefully we can lay the cornerstone for the building of better health for all Americans, through better nutrition."

What ensued for the next 35 years was the largest increase in obesity the world has ever seen. 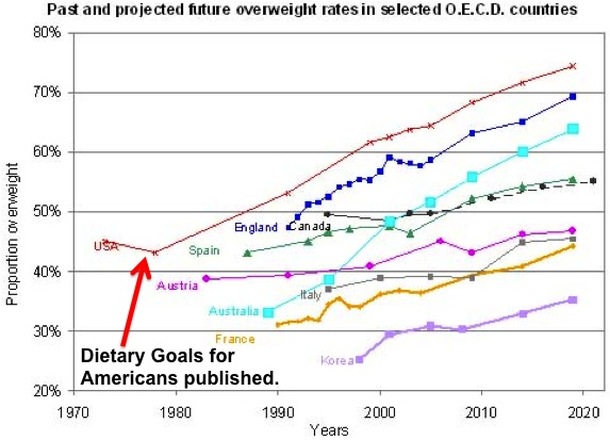 Not all members of the Dietary Goals committee were in agreement. Charles H Percy, a Ranking Minority Member voiced his concern for what was being done:

In fact, because I recognize many will read or hear only about the Dietary Goals….I feel the American public would be in a better position to exercise freedom of dietary choice if it were stated in bold print on the Goals and Food Selection pages that the value of dietary change remains controversial. And that science cannot at this time insure that an altered diet will provide protection from certain killer diseases such as heart disease and cancer…I recognize the desirability of providing dietary guidance to the public ... In my judgment, however, the best way to do this is to fully inform the public not only about what is known, but also what remains controversial regarding cholesterol, the benefits of dietary change, and the reliability of food intake data. Only then, will it be possible for individual consumers to respond optimally to the Dietary Goals in this report.

Of course, many changes occurred during this time period which could have independently contributed to the obesity epidemic, and simply implicating this correlation as proof that the dietary goals were the cause would be naive and irresponsible. However it is reasonable to ask a simple question:

Over the past 35 years, has there been any randomized clinical trials supporting the use of the low fat, high carbohydrate diet recommended by these Dietary Goals, as opposed to a diet low in carbohydrates?

100% money will be donated and no donations will go to the Ancestral Weight Loss Registry. If after 6 months (time period subject to change) no one has found a low fat diet trial that trumps low carb and meets the criteria, all the money will be donated to the Nutrition Science Initiative. If trials are discovered that do meet the criteria, 40% of the donation pot will be divided equally among the winners, and the remaining 60% will go to NuSI.

Nutrition Science Initiative (NuSI) does not solicit or actively endorse third party fundraising on its behalf. Nutrition Science Initiative makes no representations or warranties regarding the tax implications of contributing to NuSI through a third party fundraiser, and expressly disclaims any implication that donations made payable to a third party fundraiser are tax deductible as a donation to NuSI. Funds raised can be used to provide unrestricted support or can be designated to support a particular institute or particular program or area. Use of Nutrition Science Initiative’s name, logo, photo, website or proprietary information, stationary in any mailing, advertising, or downloading of NuSI logos from the Internet use is not permitted without express written approval from NuSI.