In 1953, Ancel keys published the seminal 6-country ecologic study that found a striking correlation between total fat intake and cardiovascular mortality. It was based on his observations that increased meat consumption in America coincided  with a rise in heart disease rates. This finding ignited the diet-heart hypothesis, linking dietary fat to cardiovascular disease.

Since the 1950s, there have been a relatively small number of large, long-term clinical trials examining the potential benefits of decreased saturated fats in the diet as a primary focus. All major trials since 1966 are listed in the bibliography below. Some took place in mental institutions, some were not randomized, and some also involved major confounding interventions such as weight loss, exercise, or increased fruit and vegetable consumption. Some show benefits to replacing saturated fats with polyunsaturated fats, while others do not.

If we were to focus on the largest (i.e. > 100 subjects), randomized, most famous trials ever done lasting longer than 1 year, we are left with very few to assess that meet the following 2 criteria:

1) The only significant intervention involved a reduction in fat and saturated fat and an increase in polyunsaturated fats
2) They ask the question: does this diet reduce heart disease? (defined as heart attacks or death from heart disease)

Oslo Heart Study (1968) – 412 men, 5 year, slight decrease in CHD with intervention. Many dietary interventions accompanied the low saturated fat diet. When stratified by age, the results were significant only in subjects younger than 60.

A full list of all the trials done supporting and refuting the saturated fat-heart-disease relationship, and a more in depth description of each, can be found in the bibliography section below. There are many others that did not meet the criteria I defined above.

Meta-analyses
If we instead focus on the recent meta-analyses of clinical trials testing this relationship, the majority have failed to elucidate a benefit associated with a low saturated fat diet:


The only study above showing a benefit to replacing saturated fats with polyunsaturated fats was the Mozaffarian meta-analysis. The authors of the study claim to have only included randomized clinical trials in their meta-analysis. Surprisingly, the Finnish Mental Hospital Study was included twice – split into separate analytical pools of male and female subjects. It is unclear why this study was even included to begin with, since it was not randomized and contained a disproportionate number of control subjects who were taking cardio-toxic medications and consuming higher levels of trans fats than the experimental group (see Miettinen et al below).

Inclusion of male and female Finnish data separately further raises concern since it clearly exaggerates the apparent cardio-protective effect of PUFAs demonstrated in this meta-analysis. Excluding the Finnish data from their pooled analysis would diminish the observed results and elicit a null finding, since all other included studies apart from the Oslo heart study (RR=0.75, CI 0.57-0.99) were null: 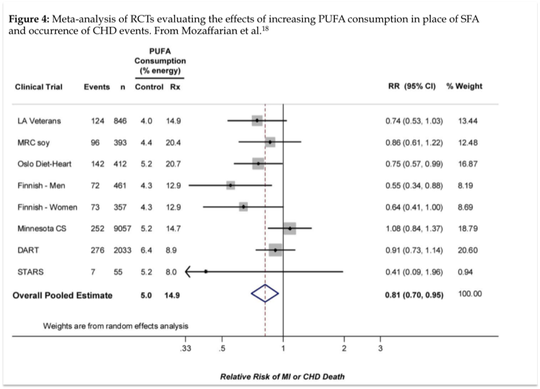 From Mozaffarian et al. 2010
The evidence from clinical trials fails to show that the simple act of replacing SFAs with PUFAs decreases the risk of CHD. The only two randomized, double blind trials ever performed - the Minnesota Coronary Survey and the Los Angeles Veterans Trial - both taking place in highly controlled feeding environments and lasting 4.5 and 8.5 years respectively, failed to show a reduction in CHD risk or total mortality. Some may argue that the Los Angeles Veterans study did show a benefit, yet this only reached significance upon inclusion of secondary endpoints, such as cerebral infarction, ruptured aneurysms, and limb amputations due to peripheral artery disease. The Finnish mental study showed a benefit in men, however the study design and uneven distribution of cardiotoxic medications warrants careful interpretation of the findings and likely diminishes the external validity of these observations. The only randomized dietary trials performed in free-living individuals that have been successful in reducing CHD risk – the Lyon heart study and Oslo diet-heart trial – did so with a comprehensive dietary intervention approach that manipulated so many aspects of the diet that the independent role of dietary fatty acids cannot be ascertained.

Jump to a section:

Mente et al. (2009). A Systematic Review of the Evidence Supporting a Causal Link Between Dietary Factors and Coronary Heart Disease

Outcome: The pooled analysis from 43 RCTs showed that increased consumption of marine omega-3 fatty acids (RR=0.77; 95% CI: 0.62-0.91) and a Mediterranean diet pattern (RR=0.32, 95% CI: 0.15-0.48) were each associated with a significantly lower risk of CHD. Higher intake of polyunsaturated fatty acids or lower intake of total fats was not significantly associated with CHD. Specifically the evidence for the association between saturated fats and CHD received a Bradford Hill score of only 2 (out of a maximum score of 4), signifying weak evidence of a causal relationship.

Outcome: After 8 years, the diet had no significant effect on incidence of cardiovascular disease in the 48,835 women enrolled. At year 6, mean fat intake decreased by 8.2% as compared to the control group, with a 2.9% decrease in saturated fat; LDL and systolic BP decreased by 3.55 mg/dl, and 0.31 mg hg respectively.

Outcome: After 4.5 years, no reduction in cardiovascular events or total deaths from the treatment diet, with a non-significant trend towards a benefit to a high saturated fat diet. Results observed despite a 14.5% reduction in cholesterol levels in the experimental group.

Outcome: After 8 years of this double-blind feeding study, there was no difference in primary endpoints - sudden death or myocardial infarction between the control and experimental groups. When pooled with the data for cerebral infarction and other secondary end points likely unrelated to diet, such as extremity amputation due to peripheral vascular disease, the totals were 96 in the control group and 66 in the experimental group; P=0.01. However, deaths due to nonatherosclerotic causes were higher in the experimental group (85 vs 71 in control), resulting in near identical rates of overall mortality.

Outcome: At 2 years, the proportion of patients remaining free of major cardiac events was greater in control group (75%) as opposed to the olive oil group (57%) or the corn oil group (52%), which was close to significance, but not significant.

Outcome: Overall pooled risk reduction was 19% (RR=0.81, 95% CI 0.70 to 0.95, p=0.0008), corresponding to a 10% reduced CHD risk (RR=0.90, 95% CI 0.83-0.97) for each 5% energy increase of Polyunsaturated fats in place of saturated fats. This is the only recent meta-analysis to find a decrease in heart disease associated with a low saturated fat diet. Despite claiming they included only randomized trials, the Finnish mental study is included twice, divided into male and female data sets.

Miettinen et al. (1972). Effect of cholesterol-lowering diet on mortality from coronary heart-disease and other causes. A twelve-year clinical trial in men and women